Mt. Joy started as a rekindling of shared musical ambitions between Philadelphia high school friends Matt Quinn (vocals, guitar) and Sam Cooper (guitar). Reunited in Los Angeles thanks to the ebbs and flows of adult life, the pair met multi-instrumentalist Michael Byrnes through a Craigslist ad. They named themselves Mt. Joy as an ode to a mountain in Valley Forge National Park near Sam’s childhood home.

Following the success of their self-titled debut, the band, which began as a bedroom project, struggled with situational and romantic agony, digging themselves out of relationships that had soured in the harsh light of a life permanently spent in a van crisscrossing America. For their sophomore album, Rearrange Us (out June 5), the group enlisted the help of producer Tucker Martine (My Morning Jacket, The Decemberists, Modest Mouse) to provide a new sonic palette. While Quinn’s songwriting matured, getting to work with Martine and his state-of-the-art studio offered Mt. Joy the opportunity to explore a fuller, more technicolor sound than ever before. 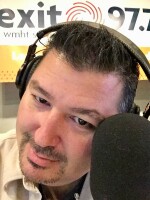