Back in 1969, Al De Salvo was a graduate student at the University of Pennsylvania in Philadelphia, and worked as an intern for the Delaware Valley Regional Planning Committee.  While in college, his housemates introduced him to the music of Janis Joplin.  After attending his first Joplin concert, he was hooked.  When he heard that Janis Joplin was playing in a festival not too far away in New York, Al and a fellow intern took the opportunity.

In our conversation, Al describes the magic of watching Janis perform, along with some of his other favorite artists.  Al talks about other aspects of the concert such as the traffic, the arts, and the swimming.

Al brought in a poster to share with everyone here at WEXT.  Though the poster is not from Woodstock, it is from a 2004 photograph exhibition of Elliott Landy, one of the photographers who chronicled the 1969 Festival.

Hear our celebration of the original Woodstock with performances from August 15-18, some of which have never been played on radio. 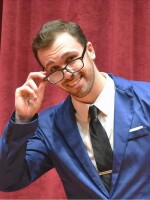 Conor Walsh
From a young age, Conor became fascinated by music. Conor recalls being rocked to sleep by his dad to songs such as "Superman (It's Not Easy)" by Five For Fighting and "Carolina on My Mind" by James Taylor. Today, Conor is going wherever the music takes him. He’s currently finishing up a degree in Music Industry at the College of Saint Rose with a concentration in Voice. Conor has worked in live sound, production, promoting, and hospitality, along with being a performer in his own right, but WEXT is his first job in the radio industry, and he feels he has been welcomed in with open arms!
See stories by Conor Walsh
Latest Stories