Never Come Down is Truly Down to Earth

Formed in Portland Oregon in 2018, the band Never Come Down won the FreshGrass Music Festival Band competition last year. They’re coming back to FreshGrass this year, performing on Friday, September 23rd and stopping for a show at Caffè Lena on Sunday, September 18th.

KC speaks to bandmates Joe, Crystal, Kaden, Brian & Ben about choosing their band’s name, the perks of performing at festivals and their song-and-instrument- driven sound that wanders between Bluegrass and Americana. The bandmates each convey just how grateful they are to be on the road, doing what they love most. 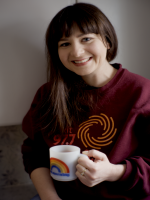 KC Morris
Some days KC wishes she had more space in her head for historical dates, family members’ phone numbers, and directions, but alas that space is mostly occupied by lyrics to pop songs she first heard as a tween.
See stories by KC Morris
More Episodes